Charlotte Pringuey-Cessac. Drawing in perspective. This artist is interested in the dialogue that develops between the setting and its visitor, in a stong kinesthetic relationship. In an experience involving the senses, she invites the guest’s body and imagination to allow itself to be transported down a re-invented hall. Poetic tension envelops the architecture to the point of dizziness. 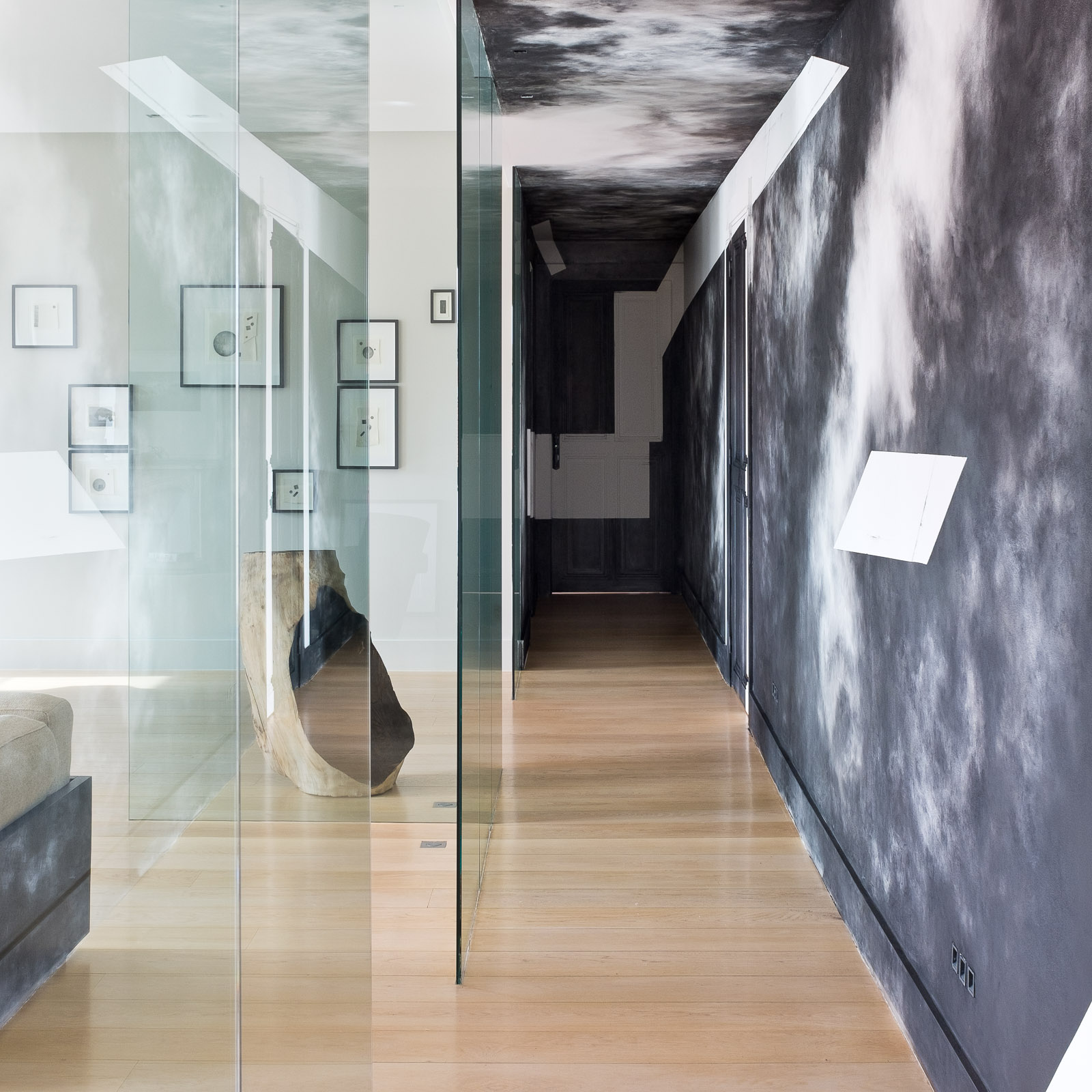 Alexandre Dufaye has invited three artists in succession to take care of his walls. From one end of his contemporary apartment to the other, from November 2015 to April 2016, three variations on the same support… A long hallway with glass partition walls which have to be taken into account. At the end of the corridor, a world can be glimpsed. Wanting to approach it means first deciding on a view-point, and taking the concepts of territory and passage into consideration.

In an exercice of style, a lesson in architecture and the imagining of space, three artists for three projects, sowing the seeds of doubt in a perception combining reality and illusion.

From the richness of their differences and the magic of an ephemeral project to a play on clashes, a throw of the dice will not abolish the coincidence of their encounter with architecture. Over the months, studies take shape, designs succeed one another. In this apartment in Nice, basking in light, where the silhouettes of objects are tastefully arranged, the life of these undertakings blend into everyday living. Each in their own way, Xavier Theunis, Charlotte Pringuey-Cessac and Kristof Everart deliver their interpretations of the invitations they have received.

/// Xavier Theunis is represented by the Galerie Catherine Issert /// 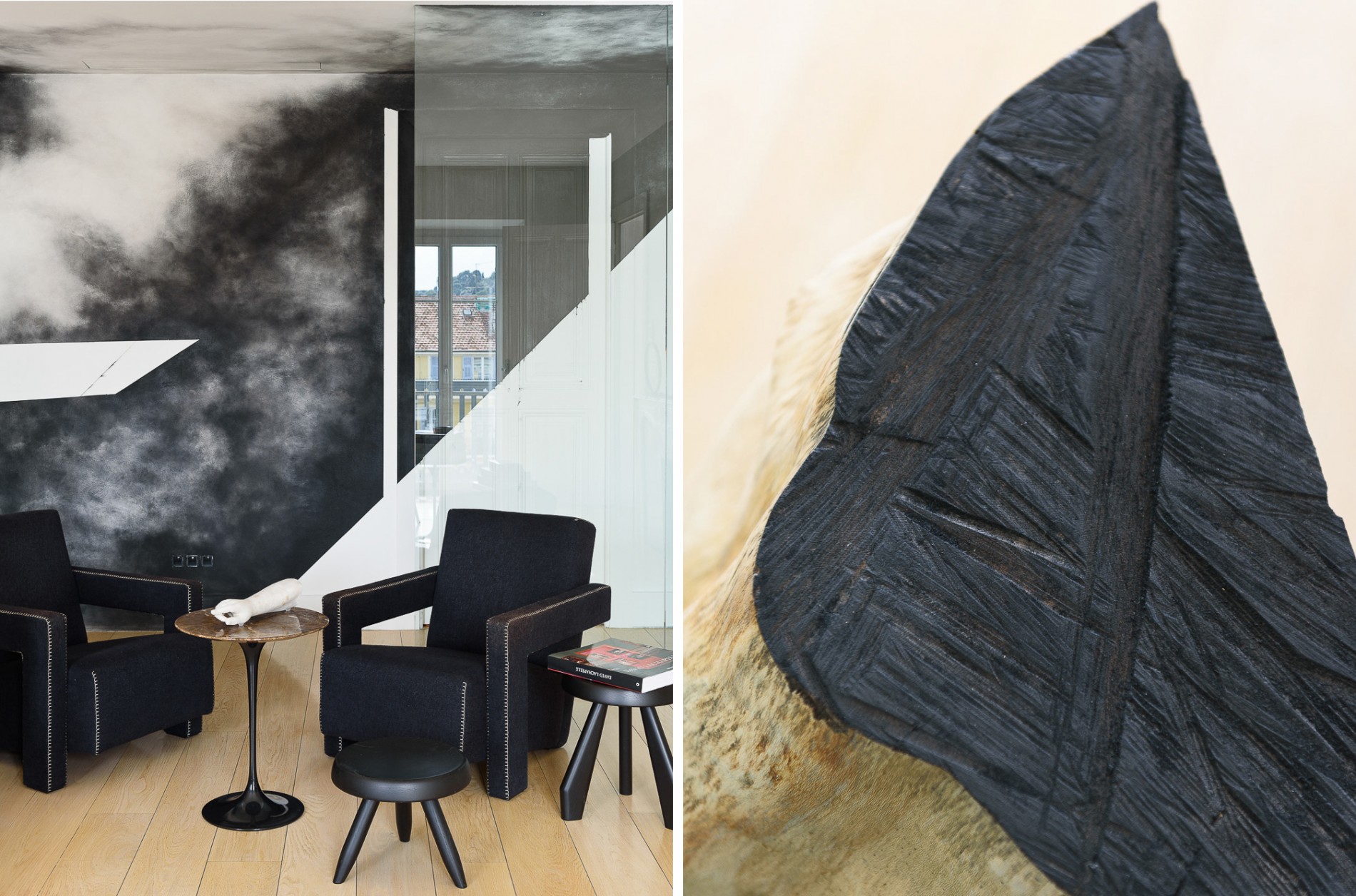 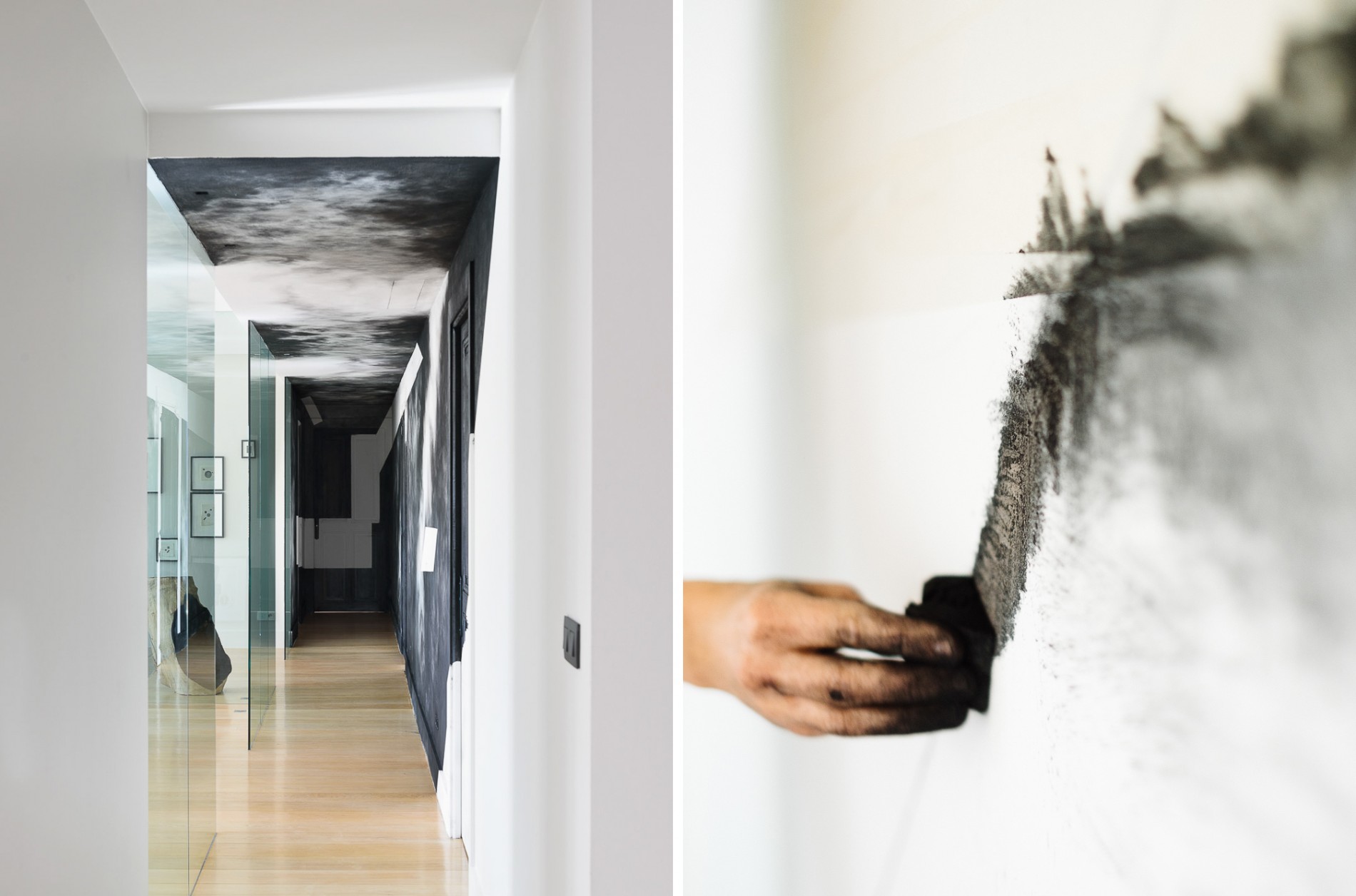 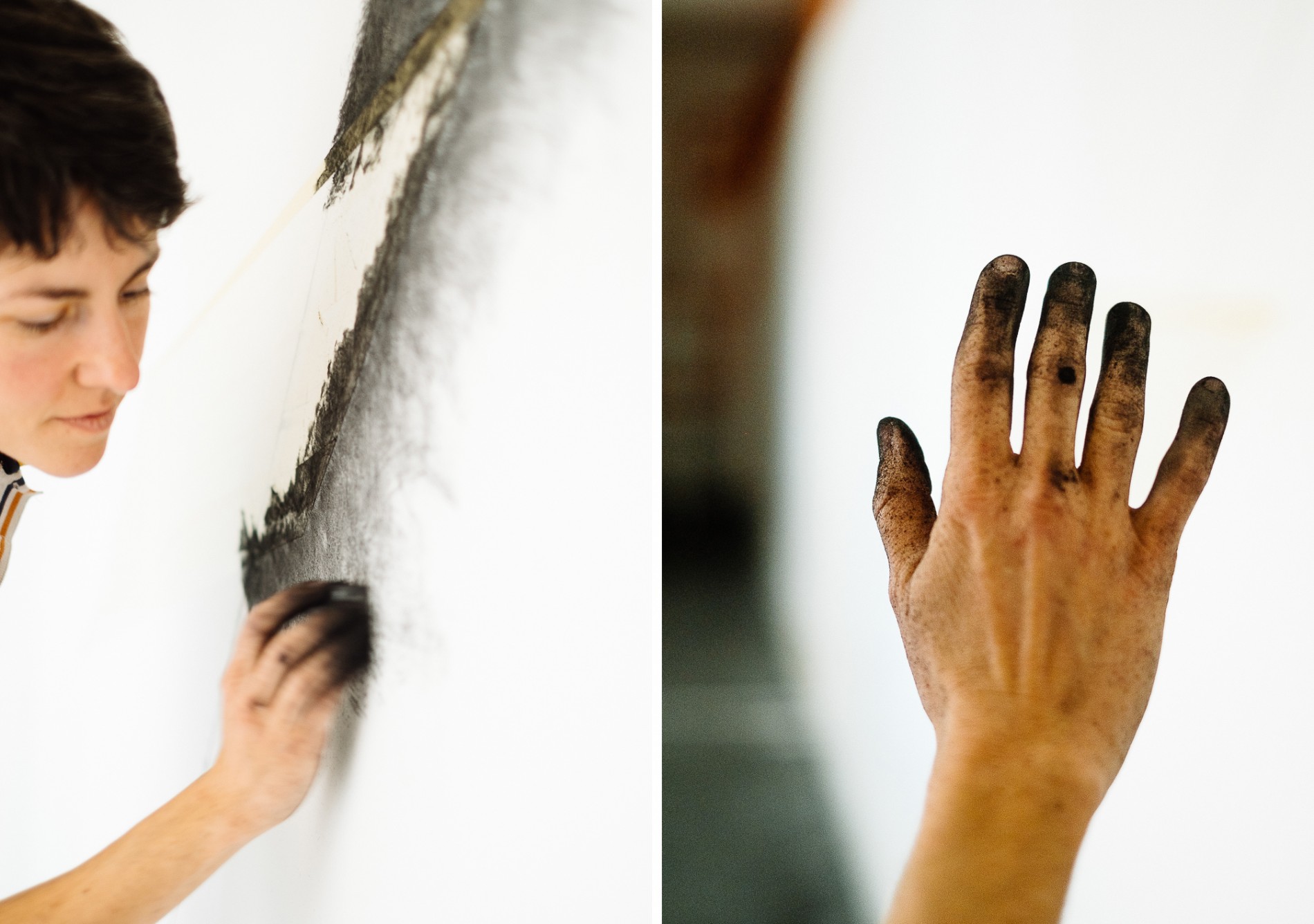 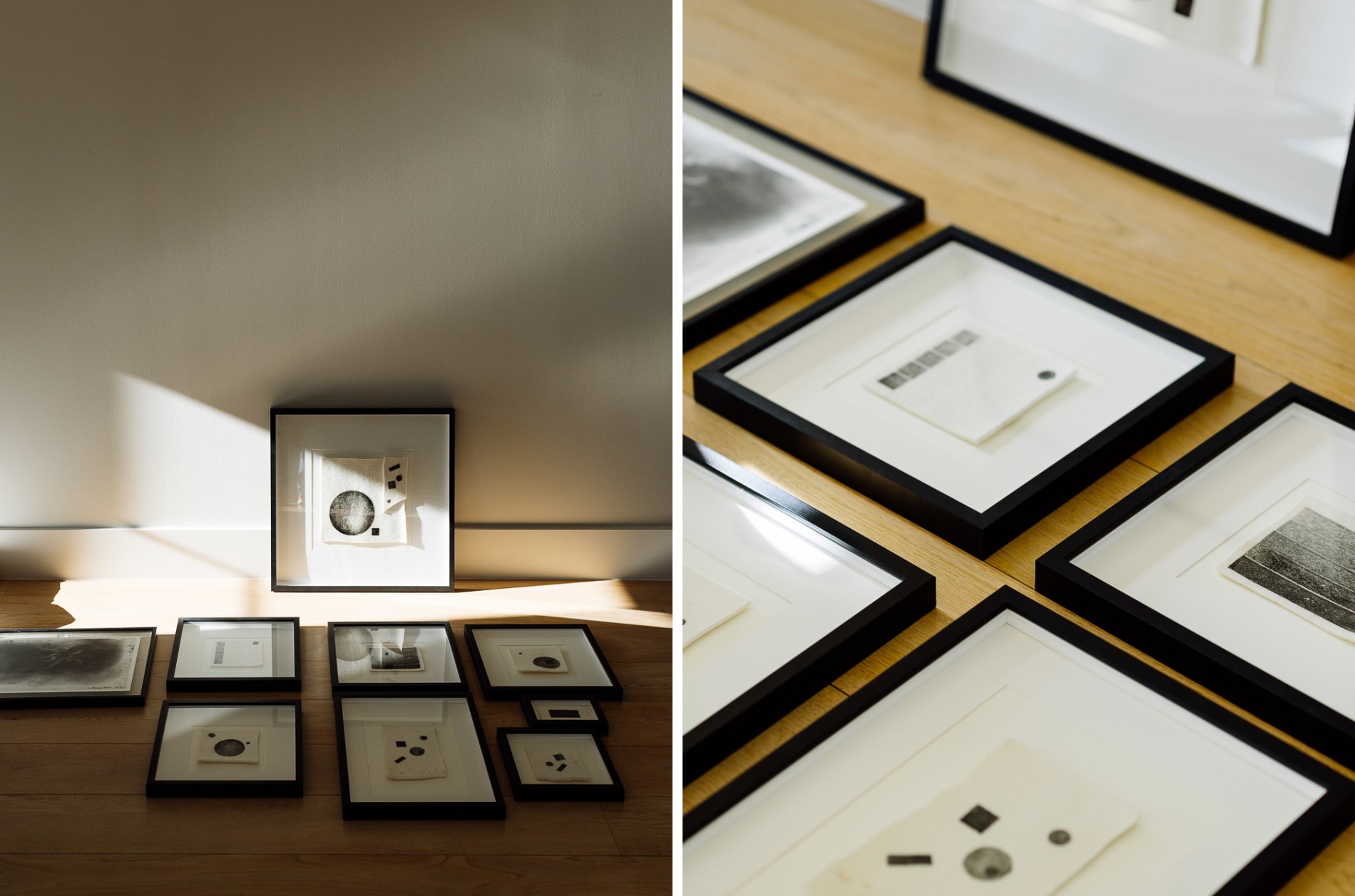 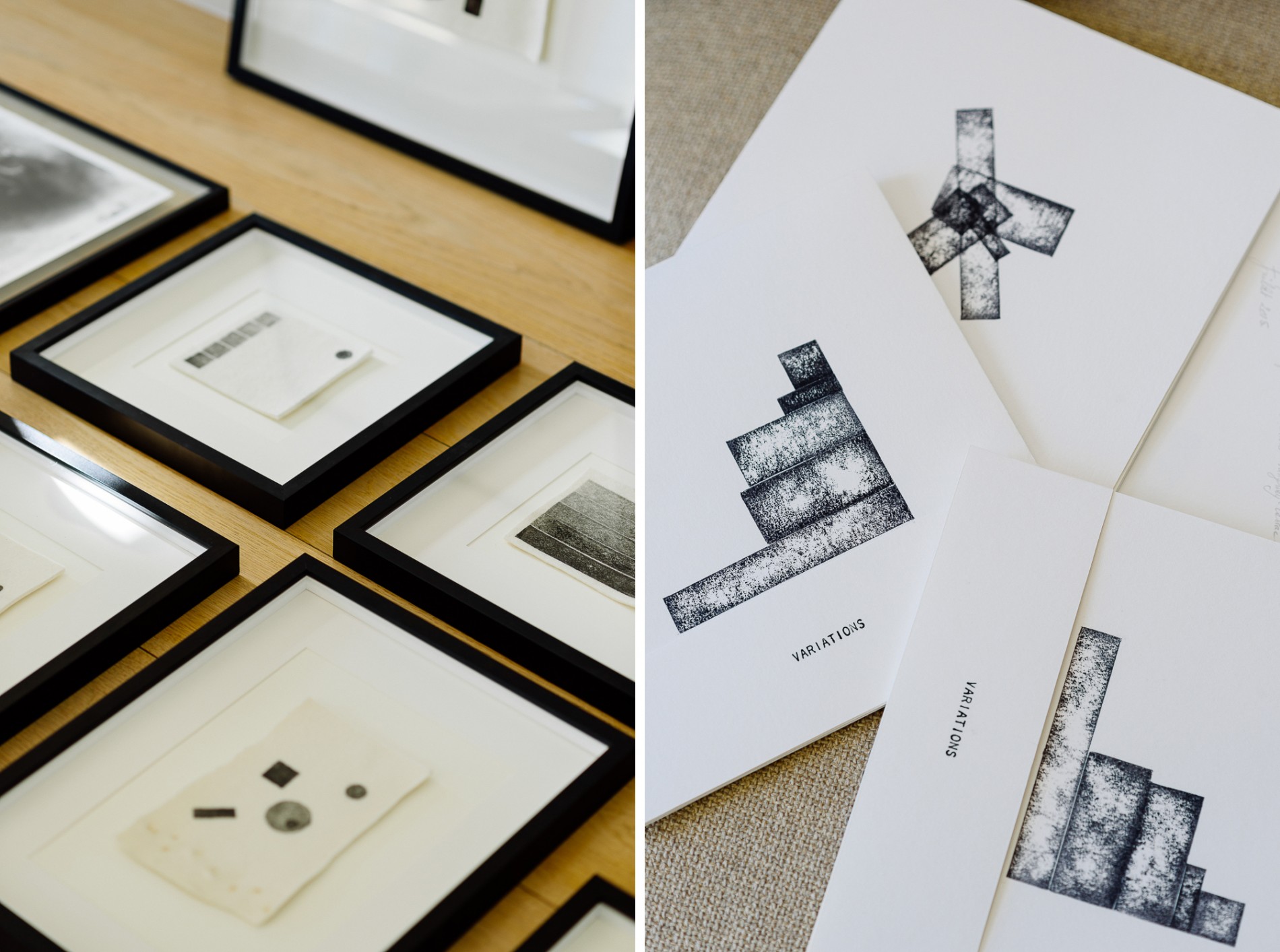 “Charlotte Pringuey-Cessac’s work is characterized by a strong link between process and subject. She uses coal, just as, according to Pliny the Elder, the first woman ever to paint – or, more exactly, because these drawings are quite large – a heap of coals. The first instances of this activity, not artistic, but nonetheless representative of man, are murals. With drawings of trees on the wall, Charlotte Pringuey-Cessac joins in the longest tradition of painting, a tradition as real as Lascaux or as imagined as Pliny’s probably is. The first pictorial practices were certainly connected to ritual. And when we see her working, alone, at night, when we hear her murmuring, scratching, it becomes almost impossible not to place her work in this tradition. Is not this work as much work about an object as work about herself ? With her natural sponge, she erases until the moment when the erasures are as important as the lines : the tracks of disappearance make themselves anintegral part of the whole.” Klaus Speidel, art critic, « Ne pas toucher au contour » exhibition, 2006. 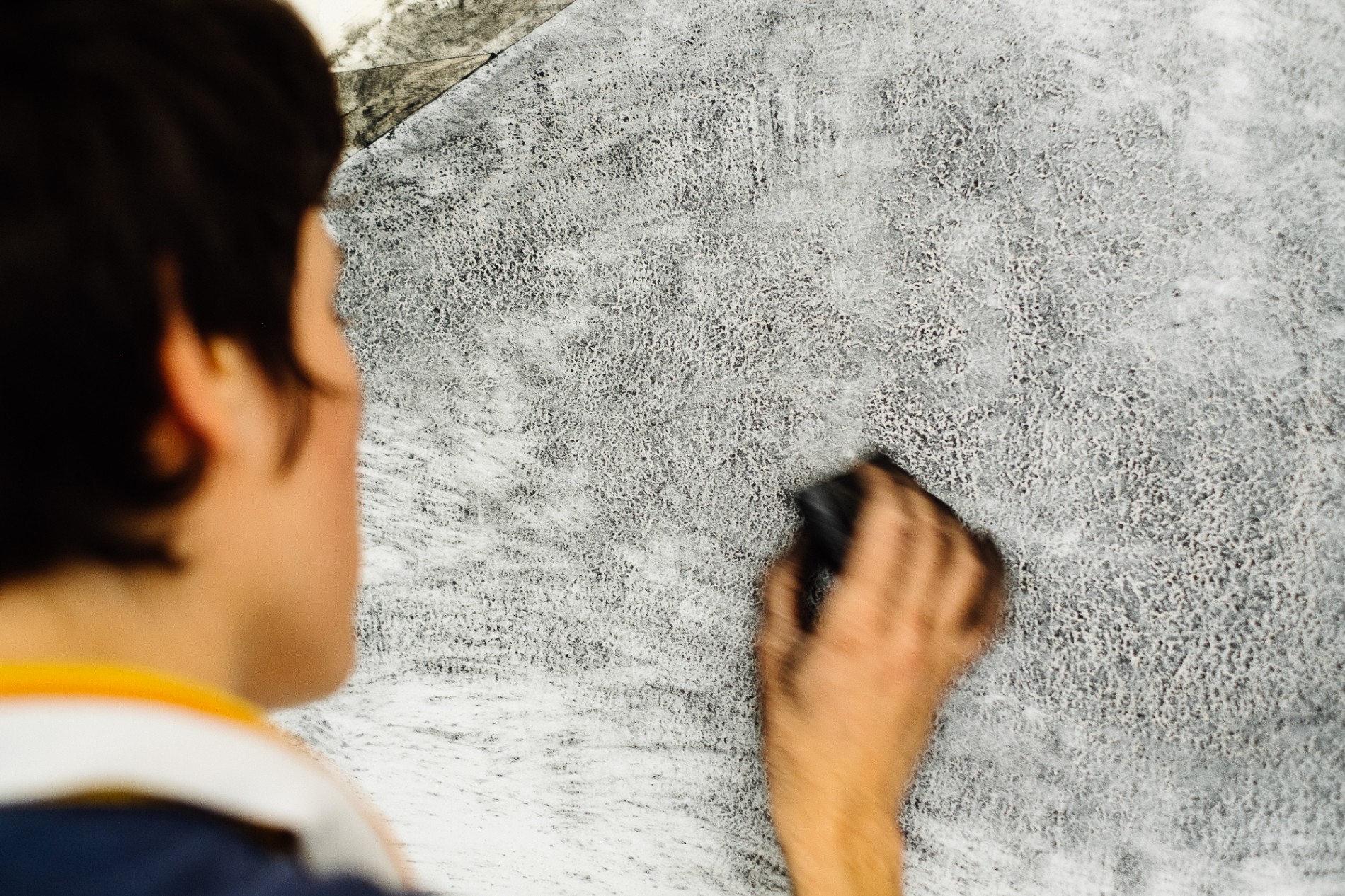 Kristof Everart. Geography of space.  His training at the crossroads of architecture and the fine arts is reflected in all his work as an artist. His project for appropriating the hallway is open to dialogue and overthrows codes. It is a matter of “recovering”, of an intimate territory with fantasized frontiers.