After arriving in France at the end of the 1940’s, Antti Lovag won his spurs with Jean Prouvé. In the ‘sixties he worked with Jacques Couelle, one of the first architects in France to develop organic architecture. In the early ‘seventies, he embarked on the construction of the Maison Bernard, in which he expressed his own radical and innovative concept of living accommodation.

Antti Lovag has a very special view of architecture. To emphasize his unconventional approach, he defines himself as an “habitologue”. He is not interested in architecture in itself: he focuses on Man and his living space in order to create an “envelope” that will meet his needs.

Convinced by Antti Lovag’s talent and innovative ideas, Pierre Bernard gave him the freedom, means and opportunity to put them into practice for almost 20 years. In those years comprising their shared adventure, Antti Lovag was thus able to develop a new kind of “housing” which now bears his name.

The Maison Bernard was virtually finished by the late ‘seventies. Designed as a family home, it consists of a series of shared areas and private spaces dedicated to each of the four members of the family. It is one of three iconic examples of Antti Lovag architecture which is often considered to be his most fully developed achievement.

Today Isabelle Bernard & Jean-Patrice Bernard have created an endowment fund around the House Bernard to continue a long adventure that led to the creation of an architecture that marked the second half of the twentieth century. The endowment Bernard House is to protect the work of Antti Lovag performed with Pierre Bernard . The original family home , this house is one of the finest achievements of organic architecture .

Upon the occasion of its creation the Maison Bernard endowment fund asked photographer Yves Gellie to create a series of artistic color based around Antti Lovag’s architecture.

Site of the Maison Bernard 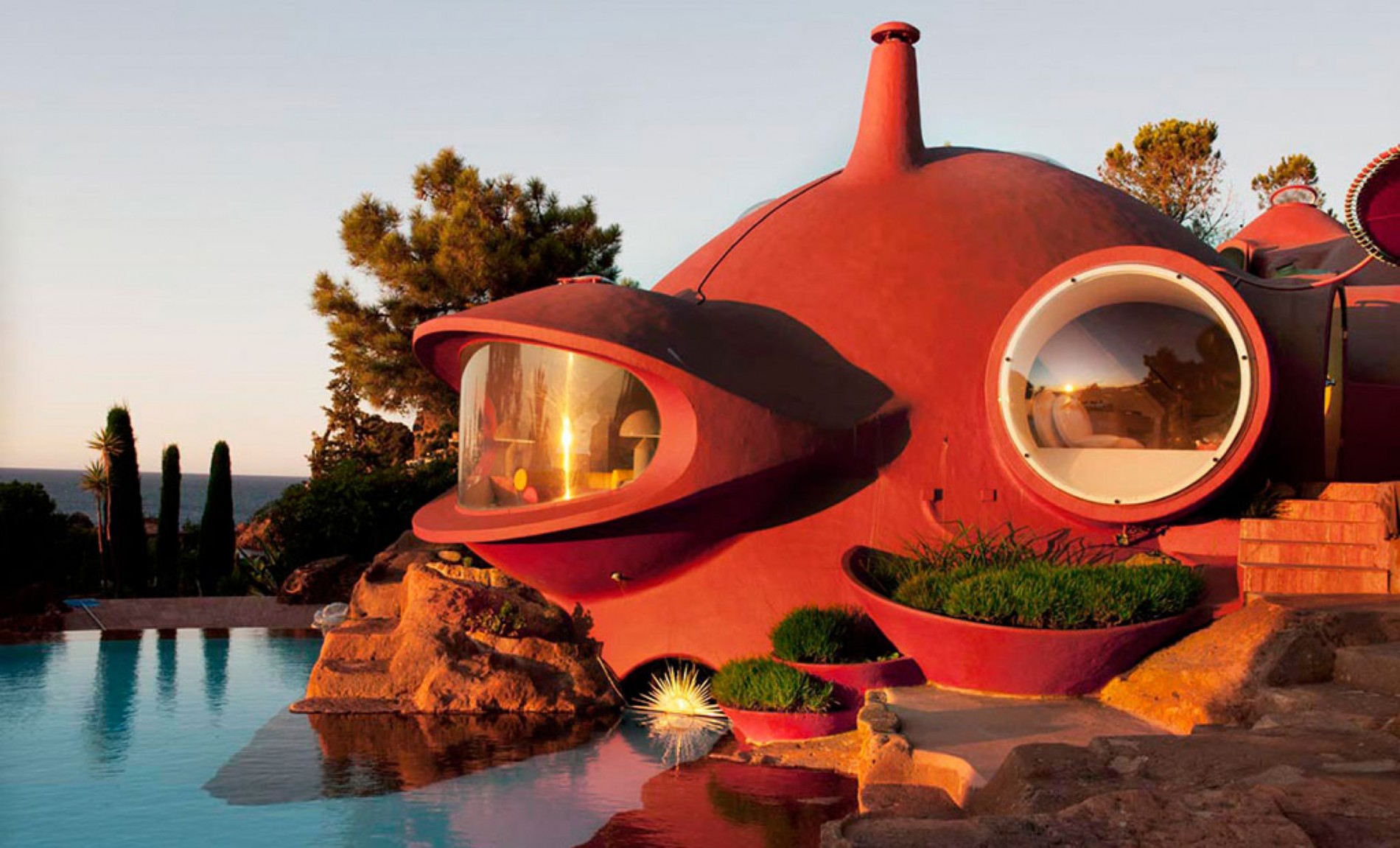 Antti Lovag is an “habitologue” who designs homes as free spaces in which he abandons right angles in favour of spheres and curves. His encounter with Pierre Bernard, adventurer and benefactor, enabled him to complete the construction of his first dwelling.

In order to build, Antti Lovag lived on the site. After studying nature and the specific features of the site, he began by creating a metal frame allowing him to visualize the indoor areas and define openings with views of the sky, sea or scenery. He then sprayed a layer of concrete onto a structure composed of rods of reinforced concrete.

Originally designed as a family home, the house is now one of the most fully developed examples of organic achitecture in which Antti Lovag was able to put his most innovative ideas to the test. To meet its occupants’ requirements, the architecture is comprised of spherical areas which blend into the site, incorporating the surrounding nature and meeting its owners’ expectations by going beyond strictly rational necessities.

The aim of the Maison Bernard Endowment Fund is to protect and perpetuate the architectural achievement of Antti Lovag, carried out with Pierre Bernard in Théoule-sur-Mer in the 1970’s.

The purpose of the Maison Bernard Endowment Fund is also to promote Antti Lovag’s work and make it accessible to the public. The property is now open by appointment every Tuesday, from April to October. Each year, the Endowment Fund also welcomes an artist in residence. The artist selected must produce an original artwork in keeping with the architecture of the residence and its environment. The works are then presented “in situ” on a permanent basis. For further information, contact residence@fonds-maisonbernard.com

In order to remain a place open to creation, the Maison Bernard Endowment Fund welcomes an artist in residence each year, for a maximum stay of six months. The artist selected must produce an original artwork in keeping with the residence and its natural environment.

The artists receive a grant and benefit from an independent dwelling/studio, built by Antti Lovag in the ‘seventies for his own use. Renovated in the spring of 2014, this dwelling/studio of about 90 sqm opens out directly to the sea. Artists can also make use of a space reserved for the production of their artworks. By the end of the period of residence, the artist selected must have completed his project.

The residency is open to artists of all nationalities and from all the various artistic disciplines (video, sound, light, sculpture, land art, green art…). The content and artistic form of the projects are free as long as they are in keeping with the architecture and the site. The works produced are intended to be presented “in situ”.